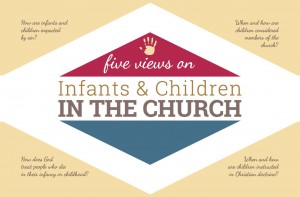 This talk is from a conference held at the New Orleans  Baptist Theological Seminary (Southern Baptist) on the topic of Infants and Children in the Church featuring Five Views: Eastern Orthodox, Roman Catholic, Lutheran, Reformed, and Baptist. Rev. Gregg Strawbridge, Ph.D. presented the Reformed view. See the Outline (pdf) for the visuals and notes. The audio is available here MP3 and the PDF of the presentation (keynote slides) is available in the OUTLINE of the item (PDF).

In the debate I did with James White, I wanted to provide a simple way to address some complex issues of interpretation relating to baptism, so I named three fallacies that (I believe) attend the Believer’s Baptism view. This is a post to elaborate on the first of them.

The Eunuch Fallacy – assuming that adult conversion examples/commands settle the case of the children of believers. Why weren’t the eunuch’s children baptized? (umm, well, he’s got no) . . .

The interactions with Baptists of which I am aware assume without argumentation or cogent proof that a command or an example of adult baptism proves that children/infants should not be baptized. This is one of the most significant issues in addressing the subjects of baptism. Is it really true that  a command to “believe and be baptized” or an example of an adult’s profession of faith prior to baptism (like the Eunuch, Acts 8) (of itself) proves the exclusion of children in baptism? I think there are many reasons to rethink this.

If children were never ever included in any biblical signs or covenants, etc., then one might assume only those that have the capacity to confess the faith could be baptized. But we have thousands of years of the inclusion of children in signs of covenant prior to this. We have an entire theology of the generational promises (Gen. 18:19; Ex. 34:7). In the case of circumcision we have exactly the same kind of sign inclusion: adults coming into the (old) covenant submitted themselves to Yahweh, but their infants were included (without conscious consent). So the Baptist case depends on a very important assumption: the commands and example to believe and be baptized actually exclude children/infants from participation. But could someone please show this from the Bible?

We all agree about adult converts—they must confess their faith prior to baptism. Baptists and paedobaptists disagree about how to deal with the infant (and young) children of Christians. There is no explicit example of  “infant baptism” in the Bible. Baptists also should admit: neither is there an explicit case of a Christian’s child who grows up and is baptized on profession. The Bible does not explicitly address the baptism of children either way. This is a fact. This lack of an explicit basis should be acknowledged on both sides. We cannot settle the case by appealing to an explicit passage in the Bible which tells us this child was baptized or this child was not baptized. The cases of adult baptisms do not automatically settle the question.

The Baptist case rests on the assumption that “believe and be baptized” actually means “only those with the capacity to consciously confess their belief are to be baptized.” To make this assumption is a fallacy since it assumes adult capacity excludes children/infants. This was not true from Genesis to Malachi (at least). We have an entire world of biblical history prior to new covenant baptism which include commands/actions of adults as well as the inclusion of infant children. Circumcision is one example and many other rites like passover, and sacrificial meals and acts in the tabernacle/temple also include children.

I would enjoy seeing a Baptist start on the “level playing field” and then make the argument, e.g., acknowledging that the Bible does not explicitly address the baptism of children either way (infant or growing up to profess). By the way, no Baptist I know has thus made this admission which is not a matter of interpretation, but plain fact: no believers’ baptism of Christian’s child is recorded in the Bible. Could someone please argue the Baptist case from the Bible, rather than make fallacious assumptions about commands/examples of adults?

How would one argue this Baptist case? Let me suggest several way to overcome the Eunuch Fallacy:

One could argue that the Old Testament is in no way authoritative about anything and become a Marcionite, thus dismissing the OT god (sorry, I just could not resist). Seriously though, I really do have concerns when I hear Baptists routinely make “semi-marcionite” arguments that only the NT is relevant to the discussion of baptism. Let me be specific: listen to the White-Strawbridge 2015. Who refers to all the Bible as authoritative on baptism and who excludes part of the Bible as relevant? As a matter of fact, both 1 Cor. 10:1-4 and Heb. 9:10 refer explicitly to “baptisms” in the OT. Therefore, it is quite wrong to exclude the OT conceptions from the issue of baptism.

One could argue that in the new covenant no children are included in salvation, let alone baptism. I was moved early in my adopting paedobaptism by the beautiful words of the Heidelberg Catechism (73) on this point:

“Infants as well as adults are included in God’s covenant and people, and they, no less than adults, are promised deliverance from sin through Christ’s blood
and the Holy Spirit who produces faith. Therefore, by baptism, the sign of the covenant, they too should be incorporated into the Christian church
and distinguished from the children of unbelievers. This was done in the Old Testament by circumcision, which was replaced in the New Testament by baptism.”

As this doctrinal summary states, children, “no less than adults, are promised” the salvation accomplished in Christ. This is surely a comfort to all who have lost children in miscarriages and infancy. I remember a kind of epiphany about this (circa 1997). Children can have salvation. Baptism represents salvation. Children should get baptism.

One could argue that in the new covenant we are agnostic about the status of children (in salvation) and so we wait to purify the church with only those that are regenerate prior to baptism. (I used to hold this view. I think this is the substance of the “new covenant” Reformed Baptist view). But baptizing those who consciously profess faith prior to baptism is clearly not the same as baptizing those who are actually regenerate prior to baptism. It is not as though all Baptist churches have “only regenerate members” and paedobaptist churches sadly include unregenerate people. We can only deal “covenantally” with people. We do not have access to the “invisible/elect/regenerate” church roll to know who to baptize and who not to baptize. (In another post I will address the fallacy, “Baptizing the invisible Church.”)

One could argue that in the new covenant, though children may be saved, baptism (like certain priestly rites of the OT, e.g., ordination) only applies to adults/mature because it is not about salvation but setting a person apart for service, e.g., the “staff uniform of the new covenant.” (This is the view of Michael Bull). But is this the explicit teaching about baptism in the Bible? “Baptism now saves you” (1 Pet. 3:21). This verse must be explained (and the covenantal approach makes the most sense on it), but let me assure you that it is in the Bible. It is pretty hard to reconcile 1 Pet. 3:21 and about 20 other verses on baptism with the view that baptism only refers to an elite group of those in the Church. Rather, most Baptists and paedobaptists agree, baptism admits a person to the Church in a covenantal rite.

I am sure there are more defenses of the Baptist view (on the point of the Eunuch Fallacy) than I have represented in this post. So please write me and I will try to interact with it. WGS at WordMp3.com

I interviewed Michael Bull on his defense of Believer’s Baptism from “all of the Bible.” This is not a “new testament only” defense of the Baptist view, but a reading of a Scripture with a rich conception of the typologies, patterns, and architectural content of the Old Testament. The Audio is Available Here.